The Nesting Structures program installs artificial nesting boxes and platforms for wildlife species whose natural habitats have disappeared due to development and deforestation. For a reasonable fee, CWH installs nesting structures for Eastern Bluebirds,  Purple Martins, Prothonotary Warblers, Wood Ducks, Great-crested Flycatchers, Flying Squirrels, Owls and Ospreys in suitable habitat. These are protected against predators with an appropriate “predator guard.” In 2008, thousands of manmade nesting structures were monitored or placed around the Bay area for citizens interested in encouraging wildlife on their property.

CWH has installed more than 8,400 “woodie” boxes in good brood rearing habitat on freshwater marshes, creeks and rivers around the Chesapeake Bay. CWH’s main focus these days is not on increasing the number of boxes, but on maintaining ones we have put up over the years that consistently produce fledglings. Staff attention has turned to repairs, replacement boxes, GPS mapping of boxes and collecting data so the boxes can be successful for years to come. The most recent data collected by CWH shows that an average of 60% of our boxes are used by Wood Ducks and many others serve as a home for Eastern Screech Owls, Pileated Woodpeckers, Great-crested Flycatchers, Flickers, Prothonotary Warblers, and other wildlife species. Funding from the Waterfowl Festival, Fair Play Foundation, Nathan Foundation, and other donors make this and other nesting structure projects possible. 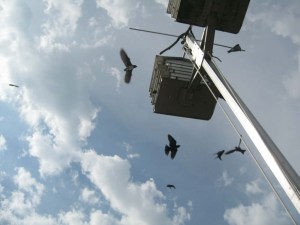