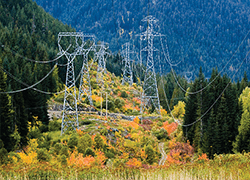 In the United States there are between 8 and 10 million acres of utility ROW, comprising potential unique wildlife habitat opportunities in property that is owned or accessed by electric, oil and gas companies. Recognizing the potential for this unique habitat within power line rights-of-way (ROW), in 1994 Conectiv Power Delivery (CPD) and Chesapeake Wildlife Heritage (CWH) formed a 15-year partnership in various research projects in Maryland, Delaware and New Jersey. From that liaison, in 2007 CWH evolved a partnership with Integrated Vegetation Management Partners (IVMP), a newly create NPO, formed by Rick Johnstone, former forester for CPD.

Our research efforts have concentrated on utility company clearing, access and other vegetation management methods along electric power line ROWs throughout the Mid-Atlantic States. The goal has been to document the effects of these methods upon different plant communities and manage them through the judicious use of herbicides. The objective is to create stable and enduring native grassland meadows for the center access lane, in the conductor wire zone, and low-growth shrub and grass communities along the buffer zone margins through the use of IVM (Integrated Vegetation Management). One long-term goal, with the collaboration of the University of Pittsburgh, is to create a predictive computer model for ROW vegetation succession.

In 2009, a new partnership developed with IVMP and Baltimore Gas and Electric (BGE) so CWH is now conducting vegetation research on the Western Shore of Maryland near Columbia and Davidsonville. These studies are in their fourth year and CWH has been documenting the vegetation changes that have occurred following selective herbicide treatments to control undesirable tall, woody vegetation and invasive species. (See note below. Species are considered undesirable if they can grow, at full maturity, to within 20 feet of the main electric conductors.)

In 2011, seven additional studies were added at the Dept of the Interior/US Fish & Wildlife Service’s Patuxent Research Refuge in Laurel, Maryland. These locations include upland and wetland sites, several of which contain rare and endangered species. Two more sites were added in 2012 and one more in 2013.

The data from these studies have shown that a well-planned and carefully thought out management plan, using IVM, can have great applicability in utility ROW management; keeping wildlife and their habitats as a foremost objective, including those of endangered plant species, while maintaining a safe, reliable energy source.

The traditional method of maintenance of a ROW is mechanical cutting, which is particularly damaging to sensitive, wetland ecosystems by leaving vehicular tire tracks, which may remain evident for years. The use of chain saws, which ostensibly appears innocuous as compared to the use of herbicides, can leave behind up to 1.5 gallons of spent petroleum-based, bar chain oil per acre in dense vegetation, contaminating surface and ground water.  Mowing can be indiscriminate in its timing and mode of operation. In upland terrains the use of bush-hogs, Kershaw mowers and hydro-axes kills and maims many turtles and snakes, as well as hidden fawns and other slow-moving wildlife and ground nesting birds. Also, the plant food species for many insects, including native pollinators, plus the cover for breeding birds, are destroyed at critical times of the year, since mowing, being inconstantly planned, can occur in any month. Using IVM methods with selective herbicides, which may be initially broadcast and then later backpacked to spot-treat escaped, targeted undesirables, the native plant community can be gradually modified to a low shrub or grassland prairie, without the often catastrophic effect of the mechanical cutting or mowing previously described. A great benefit is that herbicides are reduced over time since once a stable, perennial low-growth cover is created there is no further need for annual inputs of pesticides, as in an agro-ecosystem. The ROW thus becomes a self-sustaining plant community.

An important result from our New Jersey field study showed that undesirable species are not properly managed through mowing, since the main stem of many target species, when cut, sucker and produce tens of new plants where there was initially only one. Conversely, with the judicious use of herbicides, relatively stable plant communities can be created, easily managed and maintained. These would include, as mentioned, native grassland meadows within the ROW wire zone and low-growing shrubs along the border zone. Research has also shown that improving the ROW vegetation for small mammals creates a natural limit on tree seedling regeneration. Mice and other small rodents have a great propensity for consuming tree seeds.

Note:  In a ROW, vegetation cannot be allowed to grow to a height of more than five feet and never closer than 20-25 feet (depending on kV load) to the overhead conductors. These requirements have only recently been adopted by FERC (Federal Energy Regulatory Commission) and NERC (North American Electric Reliability Council Standards) following a huge blackout in the northeastern United States in August 2003.